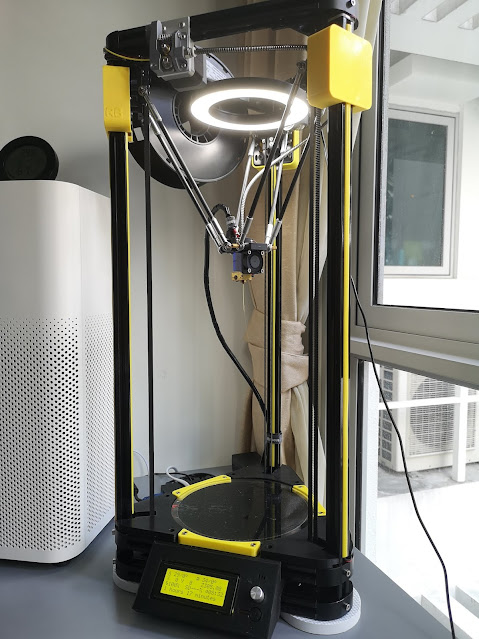 About 5 years ago, I built a Delta 3d printer from a kit I bought from AliExpress. You will find the details in this post. In that same year, I have been exploring 3D printing and building a 3D-printed electronic drum kit. The 3D models are opensource and are available on Github. The drum kit has been working very well, and I have used it to produce songs that you can now find on Youtube and Spotify. That's my other hobby.

5 years have passed, the 3D printed PLA plastic (Poly Lactic Acid) parts of my old 3d printer has degraded and started to become weak and brittle. Each part started to crumble and break apart one by one. PLA plastic is biodegradable; I guess it has reached the PLA's limited life span. Unfortunately, I have not printed reserved parts of the printer, and even if I did, it would have also degraded at the same time and would render unusable Today. The images below show the broken parts and have rendered the printer unusable. 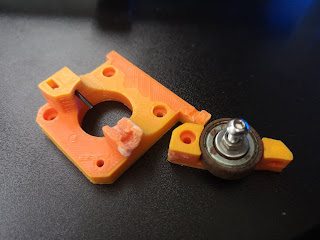 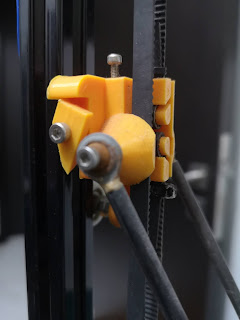 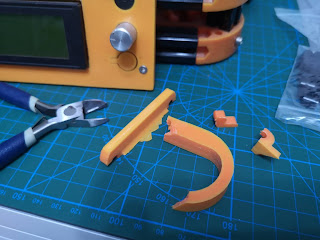 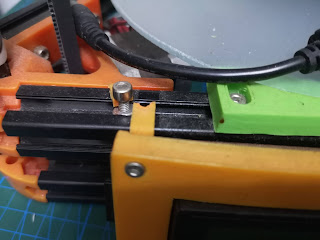 Just before the year-end holidays, I decided to rebuild the printer and make it more robust. I wanted to replace most of the plastic parts with aluminium, but I can no longer find the exact spare parts. So I had to improvise and fit non-standard parts in it. The results were surprisingly amazing!

I can no longer find a supplier of the exact same parts, so I decided to find other parts and fit them in the printer. I got new aluminium extruder parts from Creality; this was originally designed to work with Creality 3D printers. I bought generic carriage/rollers, effector plate, hot end and nozzle from somewhere else and put them all together. Later on, I also replaced the cheap, mechanically unstable push rod with a better one. With these parts, this printer is never going to look the same. 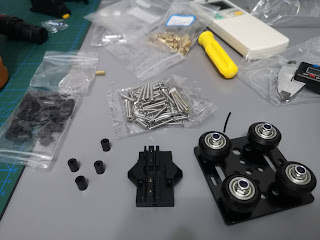 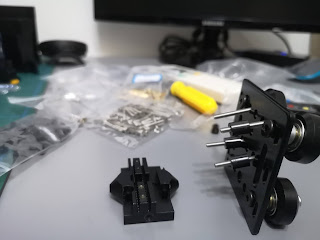 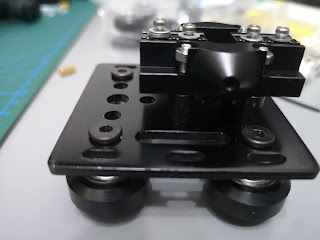 Using some nylon spacers, I managed to attach the carriage to the roller with minimum impact on the printer's geometry. The dimension is about 0.3 mm off from the original. But this is OK as I can compensate for this in the firmware. I assembled a version 6 J-head hot-end made in brass and the classic hammock effector plate.

The aluminium extruder from Creality looks beautiful. I also bought an aluminium version of the delta frames. It was originally made of injection-moulded orange plastic. 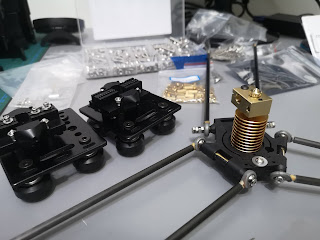 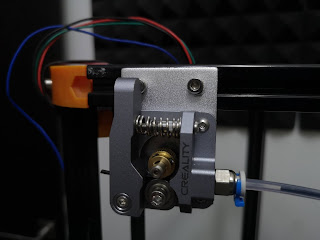 Knocking the Old Printer Down 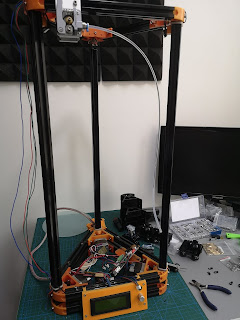 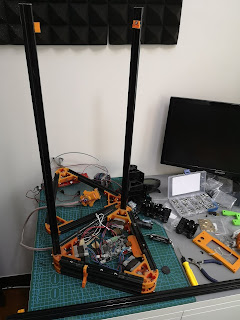 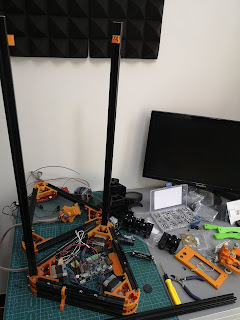 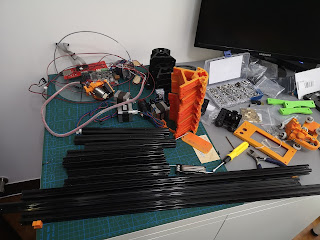 Dismantling was fun. It took less than an hour to disconnect every electronic part and take every bolt and nut. Disconnect all peripherals from the motherboard and remove disassemble the effector.

Starting at the bottom triangle frame using the new aluminium version of the corner frame, attaching the motors and building up to the top frame was the sequence I followed. During the assembly process, I made few mistakes. I had to redo some parts of the build. At this point, I realized that I may be wiser than my younger self, but I am definitely not smarter than my 5-year younger self. Nevertheless, I managed to assemble the frame with the motors in it and the timing belts installed, well greases bearings, etc..., in less than a couple of hours. 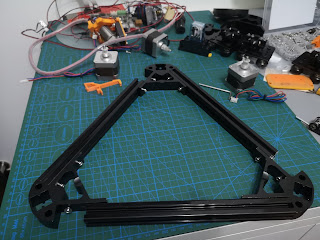 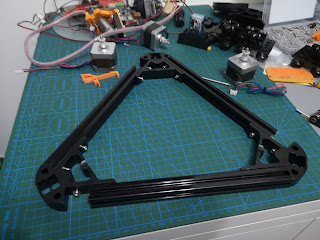 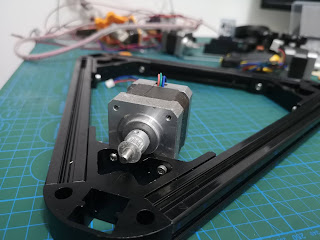 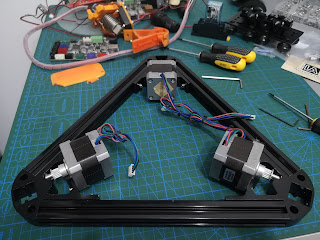 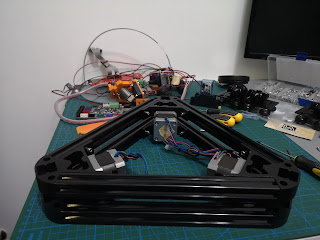 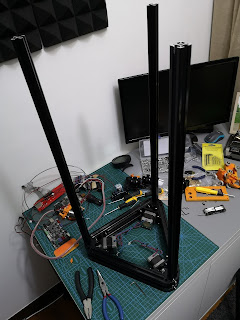 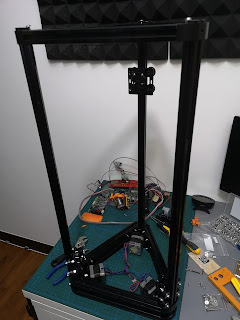 The image below shows the complete mechanical assembly—no more orange plastic parts. The only remaining plastic part is the new effector plate which is made of injection-moulded nylon. I liked the hammock auto-levelling design of the effector plate, but I could not find an aluminium version of it. The pushrods were not replaced and still made of carbon fibre. The rest are now made of aluminium painted in black (not anodized). 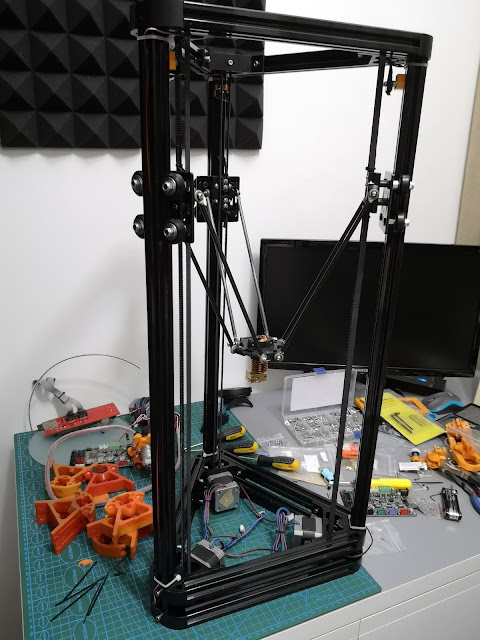 Assembling the electronics was quite fast except for one part. I realized that the Z-axis's mechanical lever limit switch for automatic bed levelling cannot be attached to this type of effector plate. The holes do not match.

After reading about this version 6 design of the hammock effector plate, I learned that it was designed to use a particular Industrial Automation optical sensor. The optical sensor is Omron SX-671. I found it on AliExpress and just ordered it right away.

I knew this order will take at least three weeks. But I want to use the printer immediately to start printing some of the remaining parts of the printer. I made a crude plastic frame that allows me to mount the mechanical lever limit switch. It worked and should last long enough to print the remaining parts.

After the electronics are complete, I flashed the modified firmware. The firmware configuration was modified according to the new geometry of the printer. The Z-axis height is slightly bigger because of the shorter hot-end and a better end stop positioning.  After flashing the firmware to the existing MKS Mini Arduino board, it just worked right away. With just a minor adjustment on the Z height, the printer was then ready to print its own LCD panel housing + plus other parts.

I have also designed a cover for the carriage rollers. This part becomes important now that I have a kid that could stick her fingers between those rollers. Putting a cover makes sure nothing gets in between the rollers and adds a better look to the entire build.

To test the reliability of the machine I just built and to break-in the new bearings, I printed a
"Baby Groot" for my little girl, which took 6.5 hours. 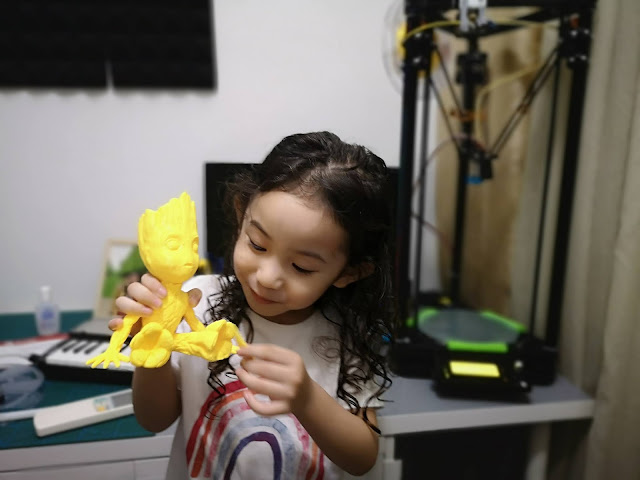 Finally, after two weeks, the optical sensor and the pushrods have arrived. The pushrods are of good quality with zero backlashes. It's built for the FLSUN Q5 printer, but it fits perfectly. After a few test prints, I can see that the print quality has improved with less mechanical errors caused by a worn-out ball and socket joints. And finally, here's the rebuild 3D printer in action. Printing a camera T-ring telescope adapter.

Including waiting for the orders to arrive from China, the project took more than a month. But it only cost around $100 in total. A lot cheaper than buying a new printer. Overall, I am very with how it came out. I like the yellow chrome over all the black metal frame.

I now am a proud owner of a unique 3d printer that no one can buy from anywhere. I hope this inspires someone to build their own 3d printer by leveraging open-source hardware.

I decided to add a heater to the print bed. The issue was that the motherboard I have, "MKS Mini v1.2", has no support for the heated bed. Therefore there is no port to attach a print bed heater. But the bed temperature sensor exists, and the D8 pin of the MPU is also exposed. D8 pin is used by Marlin firmware to trigger print bed heater on or off. Another issue is that the power supply I am using is only 72 watts, while if some print bed heaters are about 100W. So how did I solve this? 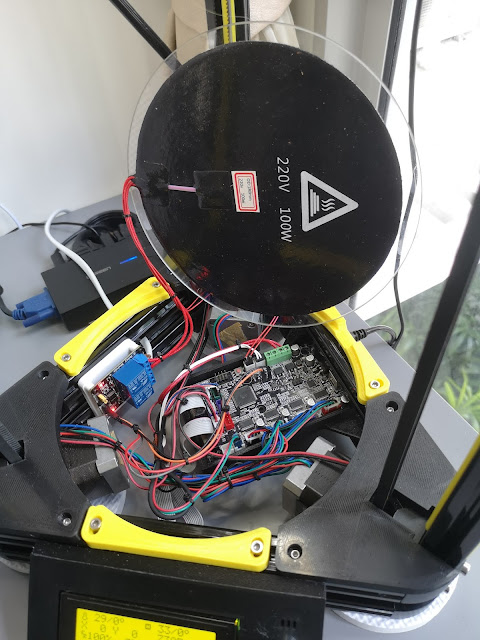 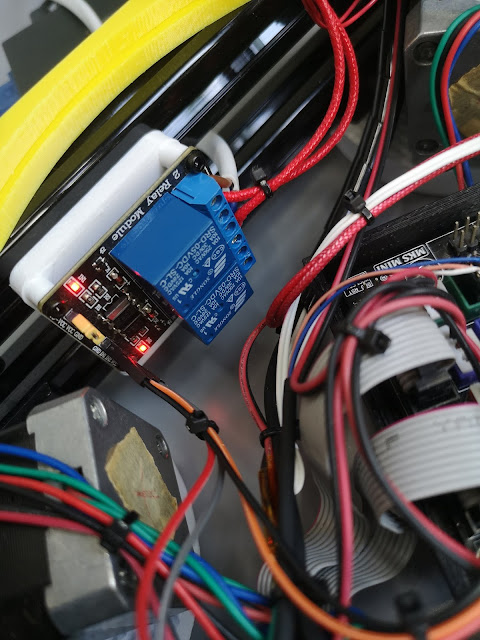 I bought a silicon heater which is 220V and 100W. Then I bought a relay module connected it to the D8 pin of the motherboard. This only adds a little bit more current load on the board just to drive the tiny relay. But then the switching of the heater is done in the relay. There is just this mechanical "tick" sound whenever the print bed turns on or off. The bed heats up to the target temperature in just a few seconds. 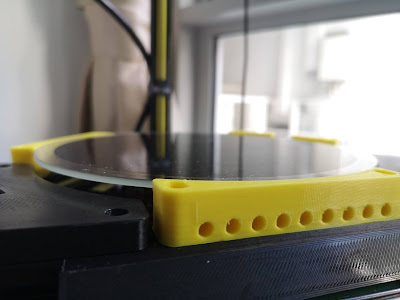 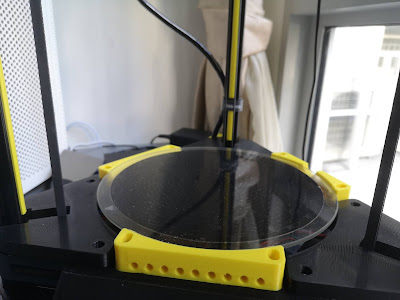 Now, with this revision, the printer can print materials other than PLA. I tried printing with ABS, and it works!