July 22, 2009, I woke up early in the morning to join a group of astronomers in observing the longest solar eclipse of our lifetime. 14.62 degrees latitude, 121.10 longitude is the location of the site where we took photos of Luna passing in front of Sol. 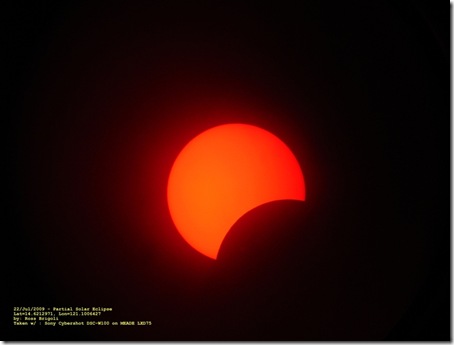 The group is consist of member of the University if the Philippines Astronomical Society and some Instructor at the Astronomy department of Rizal Technological university. We photos of the eclipse using Bamm Gabriana’s 10” MEADE reflector together with point and shoot digital cameras. We used combinations of 4 solar filters including red and yellow eyepiece filters to get this results.

We can only see partial solar eclipse from Manila, this is why most of the professional astronomers in the Philippines flew to China to get a chance to take a shot of the longest total solar eclipse. 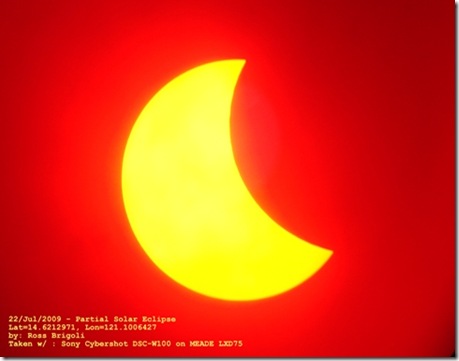 I took this photo @ exactly 9:44 AM Manila time which is one minute after the Maximum occultation. I also took a photo of the final egress just seconds before the eclipse end (photo below). 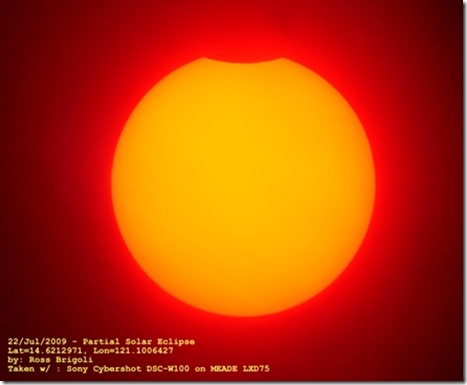 At the very same time the group of Filipino astronomers back in China experienced the totality as seen in the video below. Although they were not able to take photos as the clouds did not favor them, the totality experience alone is worth going to China.

I enjoyed the day as I was able to witness a remarkable astronomical event which reminds us of how small we are and how marvelous God is (if there is really God).

Email ThisBlogThis!Share to TwitterShare to FacebookShare to Pinterest
Labels: Astronomy