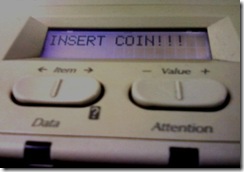 While searching for a programming solution, I stumbled into an article claiming that they can change the default displayed message of your office printer to whatever message you want. The message that will replace the conventional “Ready” message. I got interested, so i took time to read it. When i searched about it in Google, I was amazed that lots of articles where already written about it. Articles that offer a program the author wrote himself to make you do change the “Ready” message of your printer to some more humorous such as “INSERT COIN!”. Some articles suggest that you need to learn the language to do that. I learned pearl just to understand what those line of code does and found out that it’s just simply sending a string of character to an opened TCP socket to the printer on the network. The program exploits the PJL (Printer Job Language) to send a command to the printer to replace the conventional “Ready” message to something else. The command is “@PJL RDYMSG DISPLAY = “ YOUR MESSAGE”.

I didn’t like the idea of using a program written by somebody else, specially if you don’t understand what it really does. It could be a “keylogger” that could secretly grab your passwords. So, for just a simple one-way socket communication, I figured out a pretty easy way to do it without even writing a program or using a new one. I was able to change the network printer’s display at the office saying “WALANG HIMALA!” (No Miracle!) by only using the telnet console application available in all Windows box.

To do it, you only need to run the following in the command prompt:

If the command prompt clears out to black screen after issuing the command above, this means that your have successfully opened a TCP socket to the network printer and that you just need type the following text in notepad to change the message:

Then paste what you typed in notepad to the command prompt and then press “Enter”. Bingo, your done, check your printer and leave it there until some officemates notice and starts laughing. I enjoyed observing their reactions the moment they noticed that the printer saying something addressed to them :).

The message will be reverted back to default which is “READY” after a power cycle (Printer reboot). So, no worries.

Email ThisBlogThis!Share to TwitterShare to FacebookShare to Pinterest
Labels: Haques